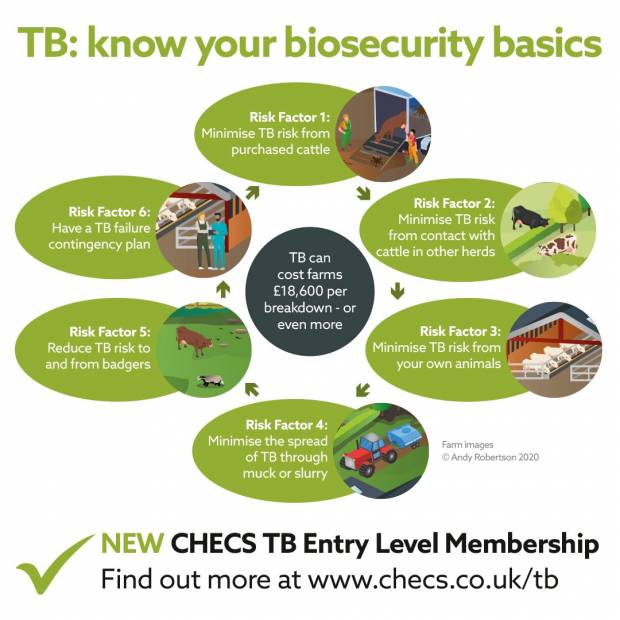 CHECS is rolling out a new UK-wide TB Entry Level Membership over the coming months, focusing on biosecurity ‘basics’ to help farmers reduce the risk of TB breakdowns in their herds.

Bovine TB has a devastating impact on farmers and their cattle. It is the UK’s most challenging animal health and welfare issue, costing farms around £18,600 per breakdown and in some cases more. “Farmers often think that TB is uncontrollable, but biosecurity is a key tool in tackling it,” says Keith Cutler MRCVS, chair of the CHECS technical committee. “It is far more than just having a boot dip on the yard; but it can be easily implemented and doesn’t have to be expensive.”

CHECS launched its TB Herd Accreditation in 2016 to help farmers protect their herds against the disease, but the tough requirements have limited take-up, he says. However, following Defra’s response to the Bovine TB Strategy (Godfray) Review in March 2020, CHECS and the British Cattle Veterinary Association (BVCA) developed the new TB Entry Level Membership, explains Mr Cutler. “This means cattle farmers can adopt a baseline standard of ‘no regrets’ biosecurity measures without some of the more challenging measures included in full TB Herd Accreditation.”

A key take-home message from the Godfray review was that there needs to be a step change in industry behaviour, says Sarah Tomlinson MRCVS, TB Advisory Service, who helped to develop the Entry Level approach. “It was recognised that TB Herd Accreditation doesn’t suit all farms and businesses, so TB Entry Level Membership bridges this gap and makes an accessible scheme for all to get involved at their own level.

“The Government recognises the important role private vets can play in TB eradication and the need to increase engagement in TB biosecurity. The Entry Level scheme promotes all of these elements on farm,” she explains.

The aim of the ‘no regrets’ biosecurity measures is that they shouldn’t require large financial investment and can be easily managed between the farmer and their vet. “Entry Level allows vets and farmers to discuss biosecurity and disease transmission pathways, and implement a tailored plan for the farm that can be reviewed and amended with ease,” says Ms Tomlinson. “All farmers should be able to make improvements; even those who are already addressing the risk factors can make minor amends to comply.”

This proactive strategy should reduce the risk of infection, duration of breakdowns and re-infection. “It’s a case of accepting there are things that will be out of your control but tackling what can be controlled.”

So how does TB Entry Level Membership work? “It is based on six risk factors, with the farmer and their vet choosing at least one option from each risk factor,” explains Ms Tomlinson. “The options are all set around good biosecurity, which is based on evidence of transmission routes. This is about implementing common sense, involving mainly time and effort.”

The six risk factors are set out below:

→   Have a TB test failure contingency plan (eg have a plan for youngstock to leave the farm).

To get involved, farmers need to apply through a participating CHECS cattle health scheme. When it comes to veterinary sign-off on membership, it’s clear that understanding the TB risks, what motivates farmers to act on these and advising about appropriate biosecurity measures are not necessarily part of every farm vet’s daily routine.

BCVA has therefore devised a half-day online training programme to address these areas, with vets who complete it being recognised as BCVA Accredited TB Advisers (BATVA). Bridget Taylor MRCVS, BCVA board member, says vets who have piloted this new course have found it very helpful. “Vet training is vital as although a lot may be dealing with TB every day, not everyone is aware of badger ecology,” she says.

“But vets are really good at managing infectious diseases on farm, which is why they are an integral element of implementing Entry Level Membership. It’s about identifying the most cost-effective ways to reduce risk – and having veterinary declaration to endorse your actions. It’s a quick and effective way to start taking more control,” she adds. “As vets, we go into this industry to make a difference and with the Government aiming to eradicate TB on farm by 2038, it would be great to say we made that happen.”

The BATVA training programme will be coming online towards the start of June, and will cost £10 for BVCA members and £55 for non-members. It covers farmer engagement, minimising the risk of infection from cattle and reducing the risk from wildlife, as well as contingency planning. Vets interested in taking part should register their interest by visiting the CPD pages on the BCVA website www.bcva.org.uk/cpd

The UK’s Chief Veterinary Officer, Christine Middlemiss, has welcomed the roll-out of this new initiative. “It’s important that livestock farmers and their vets forge a strong partnership on tackling disease,” she says. “I hope the Entry Level approach will provide a way for those who want to do more to start small and build up their herd’s resilience to TB in particular – but also animal diseases in general – in ways that fit the specifics of their business.

CHECS (formerly known as Cattle Health Certification Standards) is the regulatory body that has been certifying and quality-controlling CHECS-licensed cattle health schemes in the UK and Ireland since 1999. CHECS does not run a health scheme itself, but it ensures the schemes farmer and vets use operate to the same set of technical cattle health standards. CHECS is a non-trading organisation which is owned by the British Cattle Veterinary Association (BCVA), the National Beef Association (NBA) and Holstein UK, with the NFU having a seat on the Board.

Costs per farm of a TB breakdown have been sourced from TBHub https://tbhub.co.uk/preventing-tb-breakdowns/about-bovine-tb/bovine-tb-research-and-development/cost-of-a-tb-breakdown-report/

CHECS has just launched a new website at www.checs.co.uk – please visit for a rundown of how farmers and vets can get the right support to systematically tackle, control or even eradicate these infectious endemic diseases in cattle:

You can also find which CHECS-licensed cattle heath schemes target different diseases in your area www.checs.co.uk/getting-started/find-a-scheme/