Beef South West set to be a Bonanza 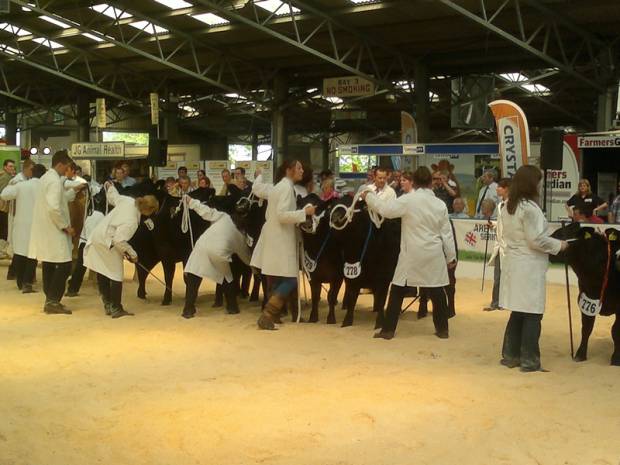 This year’s Beef South West on Wednesday 11th November at Westpoint Arena, Exeter is set to be the best yet.  140 show cattle are booked to compete to be crowned Best in Show.  Entries have come forward from as far afield as Wales and the Eastern Counties.  The desire to show at Westpoint Arena this year is so keen there is even a waiting list of entrants.  “It’s going to take a really good one to win this year’s show” was Show Chairman Rob Venner’s opinion.

The Arena at Westpoint will be packed with trade stands as agricultural retailers, feed companies, auctioneers, vet practices, banks, tag manufacturers, IT companies and machinery firms have come out in force to support the show.

The show will also see the hotly awaited “Steak Off” and burger competitions as butchers, farm shops and farmers compete to see who produces the best steaks and burgers in the West Country.

The event will be highlighting the West Country PGI for beef and members from Meat South West will be on the AHDB stand to advise farmers about how they can ensure their beef cattle qualify for the highly regarded PGI status.

A full schedule of speakers are poised to bring the West Country’s beef farmers right up to date with the latest developments in the industry.  Minette Batters, the NFU Deputy President and co-founder of Ladies in Beef will be amongst the line up.  Also speaking will be renowned veterinary experts Professor Lee Innes on the control of Neospora and Dr Beth Wells on the control of Cryptosporidium.

“This year’s show is going to be a fantastic day.  Visitors will have the pleasure of watching some of the Country’s best prime cattle being judged.  There are numerous trade stands, a pedigree breed area, machinery demonstrations and along with the speakers’ corner, visitors will be hard pressed to see it all.  Those attending will also be raising money for Meat South West, the Board responsible for the establishment, protection and future promotion of the West Country PGI.”  Rob Venner, who is also a Meat South West board member, wants this year’s Beef South West event to raise money to help MSW promote beef with the West Country PGI status in Italy.  “We need exports to help our trade and by supporting this year’s beef event farmers will be helping themselves to in due course create further demand for their cattle.”  It is Rob Venner’s view that every beef farmer in the West Country should support this year’s event.  “Not only will they be helping themselves longer term, they will also hopefully have a super day out.”