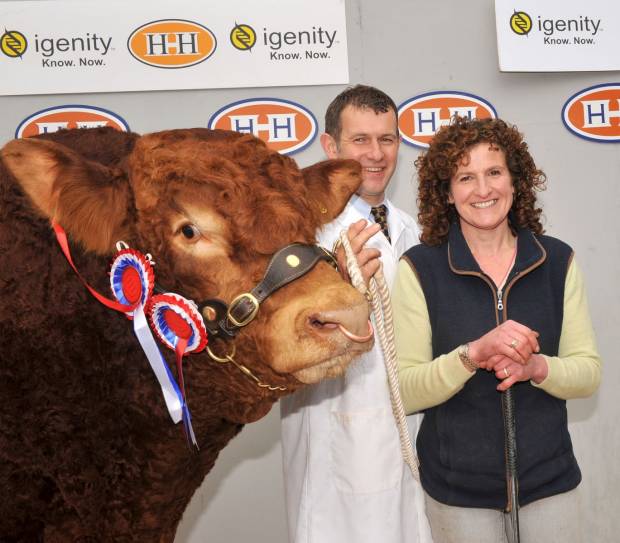 Two highly successful beef industry stalwarts, renowned for their pedigree and commercial cattle, have been invited to judge at the National Beef Association’s (NBA) Beef Expo 2016, National Spring Spectacular Show, which is returning to the Peak District National Park. Phil Sellers from Lincoln will judge the Native and Continental classes together with the Supreme championships whilst the Baby Beef classes, Baby championship and Young Handlers will be judged by Christine Williams from Shropshire.

One of the biggest beef showcases in the calendar, the NSSS will take place on Friday 20th May 2016, at the Agricultural Business Centre, home of the Bakewell mart.  With a prize fund of over £5000, a total of 12 classes will bring together the best of British pedigree and commercial cattle including Native, Continental, British Blue, Limousin-sired heifers and steers, baby beef classes and two young handler’s events together with four Championships and a Supreme Champion.

Showing at Smithfield with his father from the age of 11, Phil Sellers, originally from Morley in Derbyshire, now farms Limousin and British Blues at Thorpe Tilney near Lincoln. Having also judged at the Royal Welsh Winter Fair and Royal Highland Show on two occasions, Phil is looking forward to returning to his homeland of Derbyshire as he says here:

“Being asked to judge at such a prestigious event as the NSSS is a great honour, showing and breeding is most definitely the shop window for beef cattle, and in these challenging times a showcase such as the NSSS does show the tremendous commitment from everyone within the industry.  I am mainly watching for what catches my eye when it comes into the ring, such as good conformation and good legs as well as being well fleshed.”

Exhibitors come from all over the UK to show the best of British cattle and compete for a share of the prize fund and ribbons.  NBA Beef Expo offers a fantastic opportunity to share knowledge, observe new equipment and discuss progress and developments within the industry.

Christine Williams who farms at Lodge Hill Farm in Shropshire will be judging the Baby Beef classes, Baby championship and Young Handlers at this year’s showcase event.  Christine and her father, having always been involved with cattle, has had experience of working with various pedigree breeds including British  Blondes, South Devon’s and commercial cattle.  Christine’s love of breeding and showing pedigree and commercial cattle started from winning local market shows with homebred store cattle.

Christine commenting on judging the Baby Beef Classes said: “I consider it to be a great honour to be asked to judge at NBA Beef Expo.  When I am judging I will be looking for ‘a future champion’.  In particular I will be looking for a balanced calf, capable of carrying meat in all the right places, with exceptional style, that in turn, catches the eye and out shines its competitors.

Christine continues: “It is extremely important to encourage the younger generation to compete and have classes dedicated to achieving this goal.  The growth, at many major shows, in the standard and predominately the ever growing size of such classes, must be taken as a huge positive for the livestock industry as a whole.  The industry statistically contains, an ever ageing population so it is good to combat and encourage the next generation. These classes also give the younger generation the chance to gain and grow in confidence, experience the addictive ‘bug’ of livestock showing and hence aide in assuring, the future of the livestock industry.”