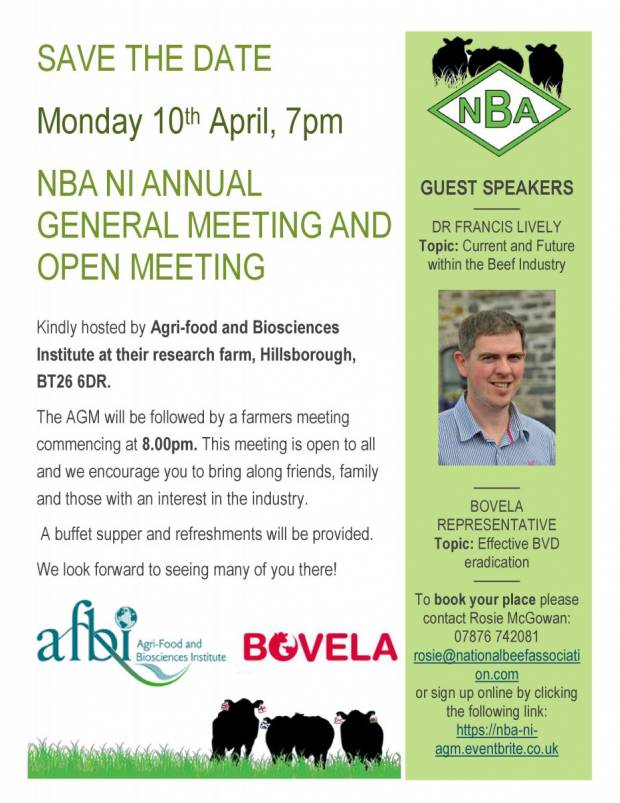 The NBA (NI) have announced an OPEN farmers meeting to be held on Monday the 10th April at 8.00pm, kindly hosted by AFBI at their Hillsborough research farm. The meeting will include an update on recent NBA work and two fantastic guest speakers; Dr. Francis Lively of AFBI presenting on ‘Current and future research within the beef sector’ and a representative from Boehringer Ingelheim speaking on ‘Effective BVD eradication’ including their Bovela vaccine. The meeting is OPEN TO ALL. Refreshments will be served on arrival and we look forward to welcoming many new faces.

The meeting will be preceded by the NBA (NI) AGM at 7.00pm at which nominations will be called for Chair of the Northern Ireland Council, Vice Chairman and Council Secretary. Current NBA(NI) Chairman, Oisin Murnion has held the position for many years and feels it is time to take a well-earned break. The NBA (NI) would like to thank him for his commitment to the role throughout his appointment.  The NBA (NI) encourage all members to attend and have the opportunity to join the committee, cast their votes on office positions and contribute to the future direction of the NBA (NI).

The NBA is a member led charitable organisation with a key focus on the beef industry and protecting the interests of those who work within it. For more information on the NBA, Open Meeting and AGM please contact Rosie McGowan (Tel: 07876742081, Email: [email protected]) or sign up to the FREE event online by using the following link: www.nba-ni-agm.eventbrite.co.uk