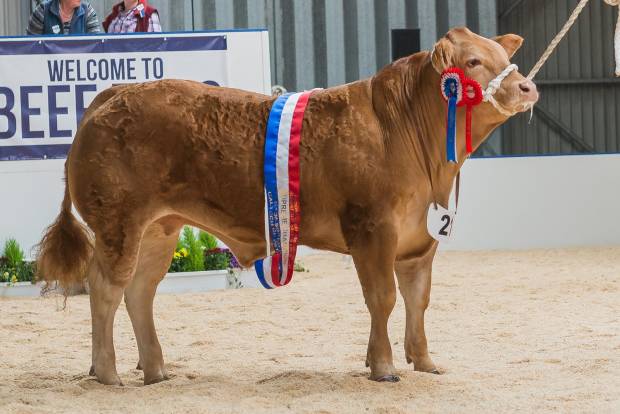 Organised by the National Beef Association this event showcased everything truly British about the UK's beef sector, bringing together the very best in British commercial and pedigree cattle, equipment, knowledge-sharing, and show classes for everyone involved in the industry.

Attended by approximately 4000 visitors, including an 86 strong bus trip from Northern Ireland and a delegation of European visitors, the showground was bustling. The 105 commercial trade stands and 20 Breed Society Stands were kept busy with farmers throughout the day, all eager to learn of the latest innovations and technologies available for the Beef Industry Professional.

The Beef Expo set off to a flying start with the prestigious Beef Expo farm tours, this year visiting three exceptional farms in a jam-packed day of knowledge sharing for all. Although the weather was a little wet it did not detract from the fantastic quality of the farm tour farms, or dampen the spirits of the six bus-loads of enthusiastic farmers.

Tractor and trailer rides drove through field upon field of quality Beef Shorthorn, South Devon and Saler cross suckler cattle with calves at foot at Rodger and Tom Elliott’s impressive beef and sheep farm. The father and son duo explained to visitors how their farming enterprise had grown from a small family abattoir and butchers to an extensive beef and sheep operation, optimising forage from 1350 acres of majority rented pasture to produce quality native bred stores and replacement heifers.

Berryfields Farm was the final farm tour of the day. An insightful tour promoting the benefits of an integrated supply chain, showcasing John Bells impressive 2000 head finishing unit and Feed company Berrystock feeds. Visitors were able to view a complete supply chain; Meadow Quality explained the supply of calves from the dairy herd, and John explained the feeding system which utilises specialised feeds produced by Berrystock to finish cattle in outdoor corals and produce uniform finished cattle to be sold direct to Dunbia. A forward-thinking business model which did not fail to inspire visitors.

A hot beef lunch served at the Elliott’s farm including native heifer beef provided by their butcher’s shop topped of the day, and emphasised the quality produce from the farm. Speaking on the farm tours, Tom Elliott, farm tour host said “We are so proud of what we do and it was an honour to be asked to be part of the Expo, and have the chance to show off our cows and calves. The following day was great, we had so many our guests come up to us and congratulate us on what a great visit they had. It just made the whole thing even more worthwhile.”

Commenting on the farm tours Chris Mallon, Chief Executive of the NBA said “We were delighted to be able to provide such a variety of farms this year, giving a snapshot of the variety of systems which exist within our industry. We hope the tours have acted as a knowledge sharing exercise, allowing farmers to view new ideas in practise, some of which they can take home and apply within their own businesses. We would like to extend our thanks to the farm tour hosts for agreeing to allow the NBA access to their operations.”

On Wednesday evening, almost 320 people gathered in Warwick Hall at Stoneleigh Park to enjoy the annual Beef Industry Dinner, this year chaired by John Bell, long standing member of the NBA, sponsor of the future farmer competition, farm tour host and Chairman of the NBA Midlands Region. A delicious beef dinner, with Aberdeen Angus beef kindly provided by Dovecote Park after which Peter Slack, a renowned after dinner speaker took to the stage. A third-generation farmer himself, Peter entertained the crowd with tales acquired over his lifetime within the industry.

The Beef Expo kicked off with the prestigious Commercial Cattle Show.  A tremendous display of over 100 cattle, turned out to the highest of standards. A tough competition, however yet again it was the Welshmen who came out on top in the Championships!
The Overall Supreme Championship and Champion Steer was taken by “Monty”, a Limousin Steer, owned by B E Williams.  Of his champion, judge Colin Phillips said: “The steer had exceptional balance which just gave it the edge. The championship line-up was superb, and the cattle are a credit to their owners and handlers.”

Bred by G. Lewis, Welshpool, this Lodge Hamlet son was bought privately in September, and was having its show ring debut. Weighing 544kgs, it was born in April 2016, and was shown on the day by Neil Lloyd, Hereford.

The Overall Reserve Champion and Champion Heifer was won by JM & SM Rowlands with “Cheeky Girl” a Limousin Heifer.  Bred by D. Brute, Brecon, and shown by him on the day, the heifer was bought by Mr Rowlands for £4,000 at the Welsh Winter Fair. Weighing in at 507kg, it is by the Limousin Cwmlimo Hercules, and out of a Brutus Cracker-sired heifer.

Reserve Champion Steer was won by a British Blue “Panda” shown by T Jones.  This homebred is by Netherwood Umpire, and out of the Limousin cross cow Black Beauty, which was a winner itself at Countryside Live and Agri Expo in 2012. Weighing 445kg, it was also having its first outing and will be aimed at the Royal Welsh in July.

Reserve Champion Heifer was taken by Neil Slack with his Limousin Heifer “Rio” A homebred by Rossignol, it is out of a British Blue cow and was shown by Hannah Brown, Leyburn.

Rio added the blue ticket to its impressive tally, which includes the commercial championship at Skipton the week previous, and reserve championship titles at both English and Scottish winter fairs.

The Baby Beef Championships were dominated by the Heifers, The Champion Baby Beef was won by T & K Bodily with “Serena” This July 2016-born was bought by the family at Brecon show potential sale in February for £1,700, from M. and B. Jones, Sennybridge.

By the British Blue bull Dragons Blues Factor, it tipped the scale at 343kgs and will be heading to the Royal Highland and Royal Welsh shows this summer, before being aimed at the winter show circuit.

While the Reserve Championship went to E & S Layton with “Lady De Beaut” Bought privately last month, it is by a Limousin bull and out of Limousin cross Blue cow by Brutes Cracker.

All the Championship prizes were kindly sponsored by Crystalyx.

The Young Handlers Competition was also hotly contested.  After much deliberation, Alicia Legg claimed first place, closely followed by Emma Rathbone in second, William Nicholls in third and fourth place was taken by B Sian Davies.

Beef Expo hosted the South Devon Technical Performance Championships for the first time this year.  This competition judges cattle based on both performance figures and inspection with entries from herds that are Breedplan performance recorded.

By Hawkley Sas Intrepid and out of Eyton Lolita 6, the heifer was reserve at the same competition last season.

Commenting on his champion, Mr Thomas said: “Its conformation and mobility was excellent. It was a very natural fleshing heifer and I am certain that it will go onto be a fantastic breeding cow.”

In reserve was the senior bull victor and male champion Eyton Trusty 3 from M. and M. Rushbrooke, Bewdley, and shown by Roden Livestock, Telford. Born in March 2015, it is by Wenfork Trusty 5 and out of Eyton Sas Dolly 7.

Speaking after the competition, Breed Secretary Caroline Poultney said, “We are delighted to have run such a successful event at Beef Expo, and are most grateful to the NBA for their warm welcome.  It has certainly been an excellent opportunity to show off the virtues of the breed and their excellent ability to perform.”

The packed seminar programme was very well attended by the public.  With industry specialists covering  a vast range of topics including organic beef production, health, nutrition, integrated beef supply chains, genetics and policy, there was something for everyone.

Once again the younger generation were invited to compete for the title of Future Beef Farmer of the Year.  kindly organised by AHDB, and sponsored by Farmskills, XL Vets, Berrystock Feeds.  With both an individual and group title up for grabs the competition was fierce. Entrants had to complete a set of questionnaires, testing their knowledge on beef health, nutrition, genetics and selection. Prizes included one year’s free membership to the NBA, a NBA Gillet, FarmSkills training vouchers, Berrystock Fleece and AHDB Beef & Lamb and FarmSkills goody bags.

The winning team mates awarded the NBA’s Duke of Northumberland Trophy were Amy Wilson, Will Rogerson, Matthew Fearon and Jack Baldwyn of Newton Rigg College,  while the winner of the individual class, Tom Sellers, received the NBA Frank Momber Memorial Trophy. Second and third prize for the individual class went to Stuart Mycock and Gemma Newby.

The trade stands and breed societies as always put on a fantastic display. The Winner of the Best Breed Society Stand, judged by NBA Directors John Vanstone and William Walton, was awarded to the Aberdeen Angus, Highly Commended was won by the Herefords while Commended was given to the Lincoln Reds.

The Best Indoor Stand, judged by Roger and Tom Elliott, was won by Meadow Quality, Highly Commended went to Dow Agri Services and Commended was awarded to For Farmers

The Best Outdoor Trade Stand, judged by the Wills Family, was awarded to TeeMore Engineering, Highly Commended went to Keenan while Commended was given to Kelvin Cave LTD

Commenting on the event, Stephen Heenan NBA (NI) Board Member and NI tour organiser said the event is fantastic for farmers.
“The event is a fantastic opportunity for our farmers to view some of the best beef farms the UK has to offer, and take home ideas to apply within their own enterprises.
“The Beef Expo show day never fails to impress, and is a brilliant opportunity to network, and learn of all the latest technologies the industry has to offer. The event remains a key date in the calendar and we very much look forward to our trip over next year.””

Chris Mallon, Chief Executive of the NBA added “This event has shown how robust the beef industry is, coming back from the poor prices of spring 2016. Our farm tours were hosted by examples of the excellence of British beef production, which leads Europe in terms of welfare, quality and provenance. As usual I thank the supply industry for their continued support of the NBA providing stands and sponsorship.”

The NBA would like to thank all the Sponsors of Beef Expo especially our Mainline Sponsors who included AHDB, Crystalyx, Dunbia, Barclays, Boehringer Ingelheim, Meadow Quality and IAE; Special thanks goes to Dovecote Park for providing the Beef for the Industry Dinner.