There can be few beef farmers who have embraced the dairy sector’s technical best practice as much as Edward Hawkins.  As well as performance recording, weighing stock and using Estimated Breeding Values, he rotationally grazes his pasture to maximize grass yields and forage quality; and the results speak for themselves. 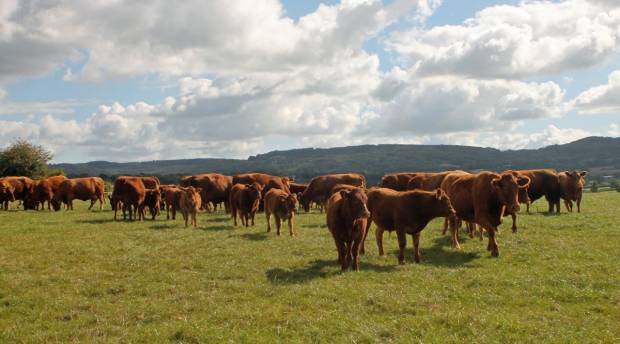 “Our system is all about producing more meat per hectare as quickly and cheaply as possible,” he says.  “The beef sector is a long way behind the dairy sector in terms of how we feed and manage the animals.  Science is an amazing tool and we ignore it at our peril: I’ve learnt a lot from other farmers over the years.”

Having previously kept Limousin X and Charolais X suckler cows, Edward first got into the South Devon breed in 2000, when he bought two cows at the Emlett dispersal sale.  “The Limousins were a nightmare to handle, and I was looking for something a bit more docile,” he says. 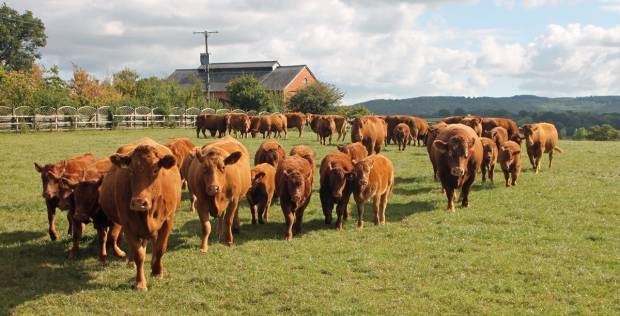 “We’re mainly arable and grass with electric fences.  One day I went out and there were only two cows left in the field – all the others had escaped into the neighbour’s 30-acre maize field.  It was above head height and it took us ten days to retrieve all the cattle – we even toyed with the idea of getting in a microlight with a tranquilliser gun!”

Unsurprisingly, the two cows left in the field were Emlett Tulip and Emlett Suzette, so Edward soon added to the herd with Tregondale Fancy and Bittleford Tiny, followed by Knightcote, Sexton, Grove, Mutterton and Brafferton stock.  “Tulip died here in 2010 aged 18; and we’ve got two Emlett daughters who both weigh over 1 tonne each.”

When choosing his stock, Edward looks first and foremost at the EBVs, with fertility, calving ease and growth rates of particular importance.  “When the calf hits the ground I want it up and sucking straight away, and for the cow to get back into calf quickly,” he says.

Initial bulls included homebreds sired by Trevowah Joe Louis and Foxhole Menzies, but Edward now uses AI semen and his stock bull Kestle King Leo.  “He’s brought the herd on in leaps and bounds; he won the Thornton cup in 2013 for performance and inspection, and we were the second most improved herd in EBLEX’s national competition in 2014.”  Last year also saw the herd scoop the Wessex Region herd competition, with Leo becoming the Wessex bull champion.

Edward calves his heifers in the spring at three years old to an easy-calving South Devon bull, with all females kept inside to bond with their calf before going out to grass.  “All our pasture is on a five-year rotation, and split it into 3-4 acre paddocks with electric fencing,” he says.  “Grass is just as important as an arable crop; we measure it with a sward stick and move the cows every day or two.  Any pasture that gets ahead of us can then be cut for silage.”

Last year the second cut round bale silage tested at 52% dry matter, 18.7% crude protein and with a D Value of 73 and ME of 11.6 MJ/kg.  “I prefer to go for quality not quantity, as you can always buffer down with straw or hay – it’s cheaper than improving quality with cake,” says Edward.

The cattle are housed again in November, on a silage, hay and straw ration with minerals and a trace element bolus.  Calves are weaned gradually a month later to minimize stress.

“We were feeding the calves 1kg/day of concentrates but with the good quality silage it was going straight through them,” says Edward.  “We changed to soya with sugar beet pulp and barley in a blend at a cost of 37p/head/day and in two weeks we saw a difference in growth rates.”

Last year the herd’s calving interval was 378 days including one cow with a prolapsed uterus.  “Male calves averaged 45kg at birth, with heifers at 42kg – and by 200 days with no creep feed heifers averaged 293kg and males (including twins) 287kg,” he adds.

To maximize efficiencies, Edward is now working with a neighbour who finishes any non-breeding youngstock on a profit-share agreement.  “He continues with the performance recording – and we’re now in the top 25% of the suckler replacement and quality beef indices,” he says.  “Everything is myostatin tested and we’re very interested in genomics too; my ambition is just to keep on improving and to aim higher all the time.”